The Ultimate Guide to Shatter Concentrates

The production of cannabis concentrates like shatter can be done using butane or CO2 extraction. It is more THC-rich than wax and frequently comes in a variety of hues, including clear, amber, dark amber, honeycomb, light green, and transparent. You may learn everything you need to know about it and how to obtain some in this blog post.

Cannabis extract called “shatter” is renowned for its stunning appearance. This attractive concentration is similar to stained glass in that it is neither completely opaque nor completely transparent. Its name comes from the fact that it is fragile and can break like glass. It ranges in hue from dark amber to vegetable oil’s pale yellow. Shatter, also known as shatter wax, is produced using an essential oil extract from the cannabis plant that contains cannabinoids, terpenes, and other chemical elements.

Cannabis Concentrates: What Are They?

Cannabis plant material and solvents are combined during the production of shatter and other concentrates. Cannabis concentrates are made by passing a solvent through finely ground cannabis material, such as butane, hexane, isopropyl, or CO2. Terpenes, the compounds that give cannabis flowers their distinct perfume, and cannabinoids are both found in the extracted oils (THC and CBD). The process yields a thick cannabis oil that is often golden or amber in color and filled with the plant’s chemically active constituents.

Butane, which produces butane hash oil or BHO, is the most common solvent used to create concentrates, however other solvents like liquefied petroleum gases (LPG) or ethanol can also be employed. Other cannabis concentrates, including wax and honey oil, are produced via CO2 extraction, but shatter would lack its distinctive texture because the wetness of the plant material is removed.

The oil is next heated and vacuumed to remove the solvent, and then it is cooled. The outcome of this procedure is a cannabis concentrate that can be transformed into wax, crumble, honeycomb, sap, budder, live resin, and of course shatter.

Cannabis extracts are extremely powerful and may have a cannabinoid concentration of more than 90%. 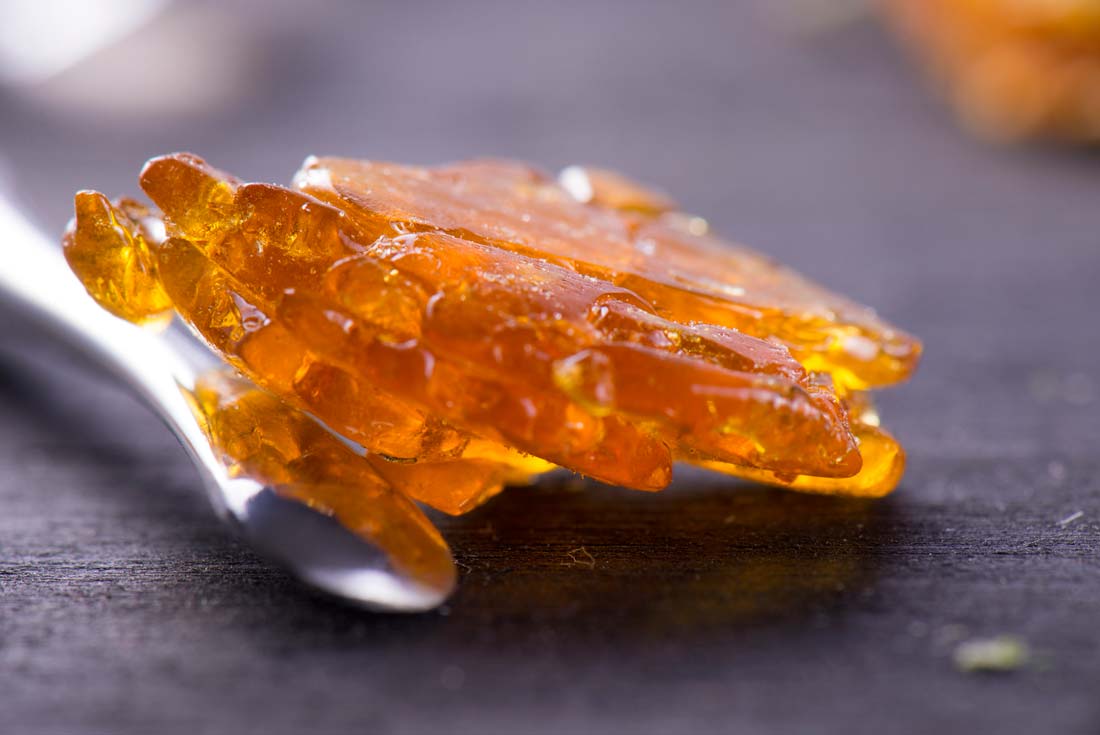 The only solid form of concentrate is shatter, however aside from that, there aren’t many real differences between shatter and other concentrates. They all complete the task in terms of recreation.

Because of the molecules in cannabis oil, marijuana shatter concentrate is semi-transparent. Shatter is derived from an extract with molecules arranged in tidy, vertical rows one on top of the other. This molecular arrangement allows light to travel through it and refract, giving shatter a glassy appearance.

It is important to keep in mind that heat, moisture, and high terpene concentration can change the extract used to make shatter, causing the concentrate to become runnier and resemble sap while retaining its translucent properties.

Other concentrations, like wax, are made through mixing, whipping, or other agitation processes. Additionally, by doing this, the molecules in the concentrate are stirred up, which is what gives it a foggy or opaque appearance.

Shatter is one of the best marijuana concentrates for keeping the cannabinoids and terpenes of the original plant material because of how undisturbed it is. Shatter is well renowned for having an extremely high potency because of this, even when compared to other concentrates.

Because of this, shatter is a preferred option for those who believe that little is more when it comes to getting high.

How to Use Shatter

Cannabis concentrates provide a quick, efficient, and smoke-free way to consume cannabis. Cannabis shatter is frequently vaporized or “dabbed” by users in a pipe, vaporizer, or other devices, just like other cannabis concentrates.

You’ll need a gadget made to operate with marijuana extracts like wax or shatter to use shatter in a vape pen. These vaporizers use an atomizer, or heating element, that heats up very quickly and vaporizes your shatter. Shatter should be inserted into your vape’s chamber similarly to how other marijuana concentrates are. Your shatter will quickly melt and turn into vapor when the atomizer heats it, which you will then breathe via the mouthpiece of the vape.

The most popular method of using marijuana shatter is dabbing. When dabbing, pieces of shatter are placed or “dabbed” on a heated object, such as a hot titanium, ceramic, or quartz bucket. Cannabis shatter will quickly vaporize when it comes in contact with a hot surface. You breathe the vapor into your lungs through the water chamber of the dab rig when you press your shatter to a heated surface.

The Benefits of Shatter

One major benefit of shatter is that it is a stable cannabis extract that can be kept in the freezer for an extended period and still function well for dabbing or vaporizing when removed from storage. However, shatter should still be utilized within two years of thawing.

Unlike other concentrates, which must be chilled and used immediately since they degrade when exposed to high temperatures for an extended time, this one must be used right away.

The Evolution of Cannabis Shatter

Shatter can be traced back to the long-standing process of hashish manufacture. Shatter concentrate was first sold by Canadian cannabis business BudderKing in the late 1990s, but it wasn’t until approximately 2003 that it started to show up often on the shelves of dispensaries.

The item had established itself as a concentrate mainstay by the 2010s. Dabbers and concentrate users once viewed it as a status thing, with many saying, “If it doesn’t shatter, it doesn’t matter.”

Shatter cannabis is a great option if you’re seeking the ideal cannabis concentrate to meet your high-THC needs. When removed from storage, this strong cannabis extract can be kept virtually indefinitely in the freezer and is still suitable for dabbing or vaping. It is less prone to oxidize than other concentrates because of its lower water content, which means that its active components won’t deteriorate as quickly, making it more long-lasting than other marijuana concentrates over time.

Since its introduction to dispensary shelves in 2003, shatter cannabis has gained appeal among users who prefer to take their time getting high by using lesser doses. Around 2010, it became a mainstay product.

Are you looking for potent, reliable, and simple-to-use cannabis concentrates? Look nowhere else! All of those things are shatter. Find it at the Helping Hands Boulder Dispensary.